Select Page
Aug 17, 2022
by Dave Warner
The Herkimer County Fair officially opened its gates yesterday afternoon at 4 pm for all of the events that will run through this Sunday, and plenty of local officials were on hand for the event.
The American Flag was raised, the national anthem was sung, and then a rose ceremony was held for the people who had been lost in the year since the last festival. The President of the Fair, Rick Althorp, said, “I’d like to welcome everyone to the Herkimer County Fair this year, and I’d like to say thank you to the dignitaries who came out today.”
He also said, “I’d really like to say, thank you, thank you, thank you, to all the people and the volunteers who make up the Herkimer County Fair. We can’t do it without you. Thank you, it’s much appreciated.” Althorp also thanked the executive board.
The media got an opportunity to ask Congresswoman Elise Stefanik of the 21st Congressional District some questions while she was at the opening. One of the things on everyone’s mind at the fair was farmers and how much they are struggling.
Stefanik stated, “It’s been especially challenging for upstate New York and north country farmers. Coming out of Covid, my office worked very hard to make sure they were eligible for some of the Covid relief programs. You’re seeing significant increases in inflation, so that means increases in fertilizer costs, in feed costs, as well as their energy costs going up, and that’s a result of failed far-left Democrat policies that are both in Washington and Albany.”
She went on to say that she is focused on being a voice for the farmers to lower their costs but also to help with the labor challenges that they are facing.
“Whether you’re a dairy farmer, specialty crops, or apples, we have all sorts of farmers in our district. We know that agriculture is the backbone of upstate New York and the north country, and I’m looking forward to being a strong voice for them, particularly going into the next Congress, where we will have a farm bill. I’ve worked on a farm bill before where we’ve been able to deliver results, and I’m going to do so again in the next Congress.”
Stefanik then talked about the issue with the next generation of farmers and what enticements might be needed to get them into the business. “First of all, we are lucky in this region that we have so many multi-generational family farms. Programs like FFA and 4H County Fairs are critical to that, exposing our youth and our next generation of future farmers because we want to continue to have agriculture here.”
She said that what she hears from families, and in particular farmers, is that the government continues to get in their way. “Whether it’s higher taxes, whether it’s property taxes in New York State, or it’s some of the bureaucratic overreach that farms are experiencing from Washington, which is why we have worked to repeal some of the regulations, why we’re working to lower the tax burden on our farmers, and why as I said, we’re working to lower the input costs, whether that’s energy, feed, or fertilizer.”
When it comes to redistricting and how it has affected her campaign, she said, “I’ve represented a portion of Herkimer County since I’ve been in office. What I’ve really been excited about is that voters know who I am. They’ve looked to our office even when I wasn’t their representative. We’ve been out crisscrossing the district going to county fairs like the Schoharie County Fair, but I’m very familiar with Herkimer County. We’ve had a lot of support here, and I’m looking forward to earning the vote based on my record of results.”
She went on to say, “I’ve done nearly 2,000 events with constituents since I’ve been in office, and I’m certainly going to keep that up, which is why I’m here today. One of the reasons is to earn that support, but more importantly to promote the Herkimer County Fair, which we know how important these fairs are to the economy, to supporting agriculture and just our rural way of life.”
Stefanik said that in previous elections, there were typically more regional issues, but this time there is real consistency in people’s concerns. “Inflation and gas prices are the number one and two issues across my district whether you are in Herkimer County or where I just came from in Plattsburgh.”
“People are getting crushed when they go to the grocery store, they’re getting crushed with their utility bills or filling up at the pump because they’re commuting a fair amount in this district.”
The third most important issue she’s heard about is crime and the lack of support for law enforcement. “We’ve seen this in Albany with the failed bail reform policies, and that is a concern everywhere because upstate New York, the Mohawk Valley, and the north country support our law enforcement.”
She said she was honored to have the endorsement of every law enforcement union in the last election and in this one as well.
“I never take anything for granted, and I think it’s important that you do that as any type of candidate. We’re going to work hard right until election day and then work even harder when we have the opportunity to have a Republican majority in the next Congress,” she stated.
Stefanik said that she feels it’s important that everyone come out to vote. “I will tell you that the energy and enthusiasm is sky high. We feel very optimistic that we’re not only going to win Republicans but Independents and Democrats as well in this district as we’ve done previously.”
“I think we’re going to see pretty high turnout, specifically in New York’s 21st District.”
You can view some images from the opening ceremony below and then the schedule of events through Sunday at the bottom. 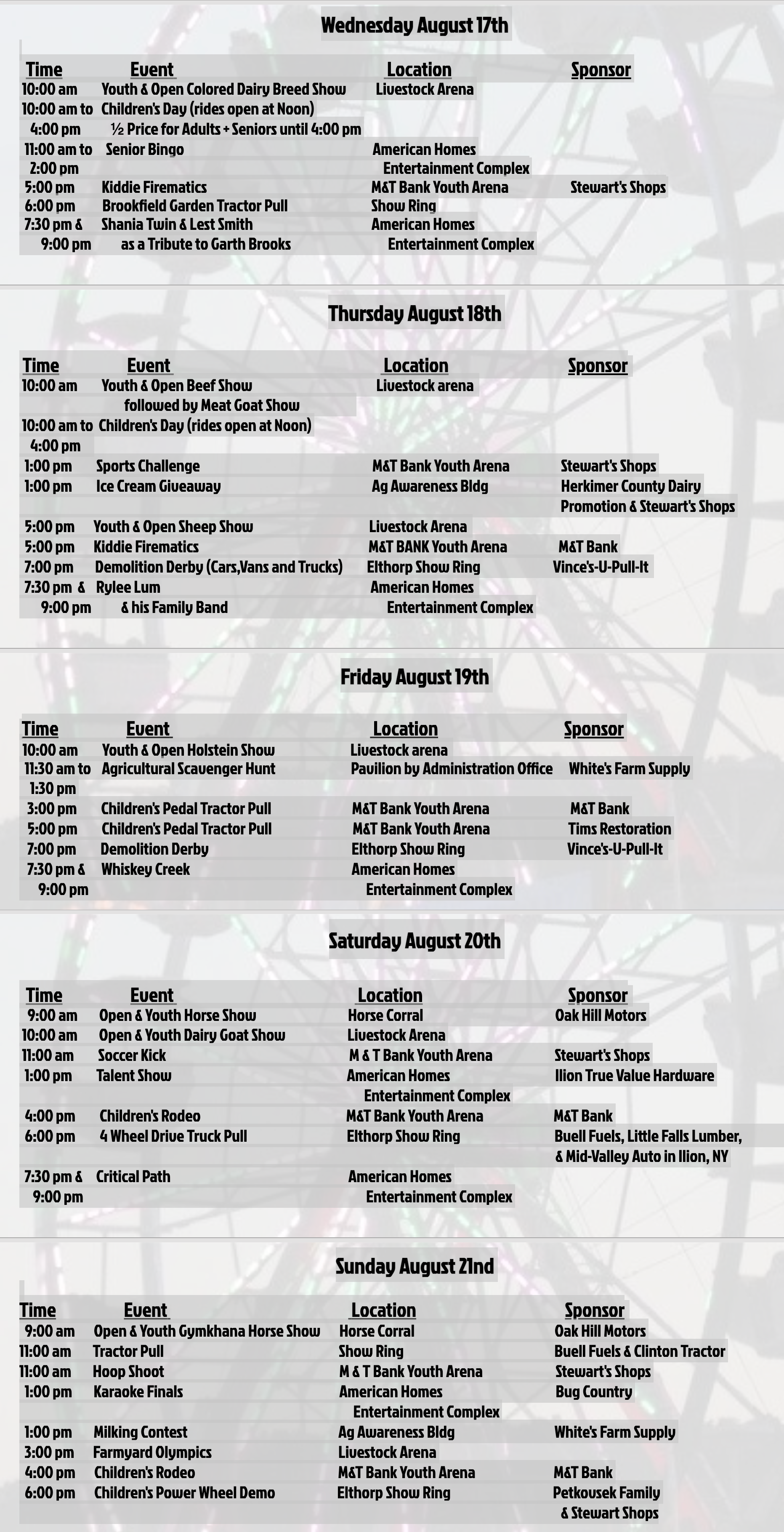 Canal Celebration was great, next is the Garlic Festival, Pizza Challenge, and then Bluegrass, Brews & BBQ! Who’s ready to mark their calendar for the only free music festival in Little Falls?
#bluegrassbbqlf #mylittlefalls … See MoreSee Less
This content isn't available right now