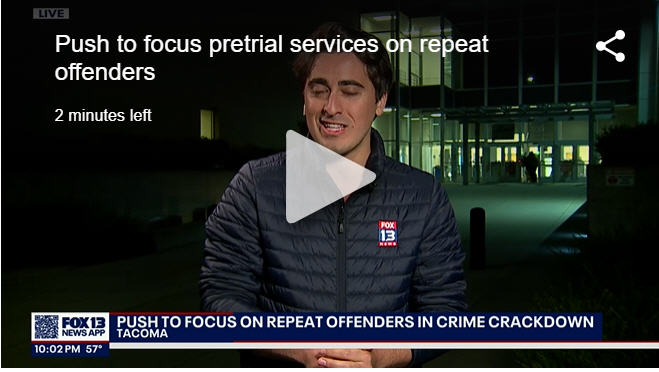 TACOMA, Wash. – During the month of June, the Tacoma Business Council is working to monitor felony criminal cases in Pierce County.

Crime is up in Tacoma and throughout Pierce County.
“It’s the repeat offenders that consistently get chances to be released to pretrial services, violate pretrial services, commit more crimes and nothing is being done,” said Courtney Wimer.

Pierce County’s website states its goal with pretrial services is to create a system reserving jail for people who are a danger to the community, and reduce disparities based on wealth and race.

According to the county’s website, 12 million people are held in jail annually across the country, and fourteen billion dollars is spent every year jailing people not convicted of a crime.

Wimer is the president of the Washington State Bail Association and manages All City Bail Bonds in Tacoma.

Wimer’s work benefits from people who do not go through pretrial services, but she says her experience with the courts has opened her eyes to issues others might not notice.

“I’ve seen everything from violent felonies down to property crime released from pretrial services. I do believe some of the violent crimes being released are not supposed to be,” she said.

Wimer, working alongside the Tacoma Business Council, is monitoring felony court cases in Pierce County through the month of June.

She says she is documenting what the prosecutor asks for, the type of information the prosecutor provides to the judge (like previously criminal history), and what the judges decide in the cases.

The goal is to compile and review the data at the end of the month to see what if any trends may exist.

Officials with the Tacoma Business Council say they will publish the results as soon as they are completed.